Late blight is caused by the pathogen Phytophthora infestans; is one of more than 170 species of this genus causing serious diseases on thousands of plant species worldwide. It is in the same group of pathogens as Pythium and downy mildews.

Phytophthora are related to aerial downy mildew pathogens, such as Peronospora and Bremia, and also to the soil- and waterborne group Pythium that cause seedling damping-off. They are not fungi but oomycetes, related to brown algae, such as seaweeds, which explains their dependence on free water for infection and spread. Because of this, the fungicides used to treat them are generally (although not exclusively) different to those used for fungi.

Generally, late blight in tomatoes is a disease that affects leaves, young shoots and both green and ripe fruits, and under favourable conditions, it is capable of causing heavy losses in terms of blighted shoots destruction of leaves and damaged fruit. In addition to causing late blight of potato and tomato, P. infestans infects a wide range of other solanaceous hosts, such as aubergine, petunia and wild solanum weeds such as nightshades.

Typical symptoms in tomatoes start with small brown lesions. These are quite often greasy looking/‘water-soaked’ and found on both leaves and stems. Under favourable humid conditions between 10–20°C, these lesions expand and can coalesce. If left unchecked, they will cause extensive leaf and young shoot death, which has the appearance of extreme chilling damage. 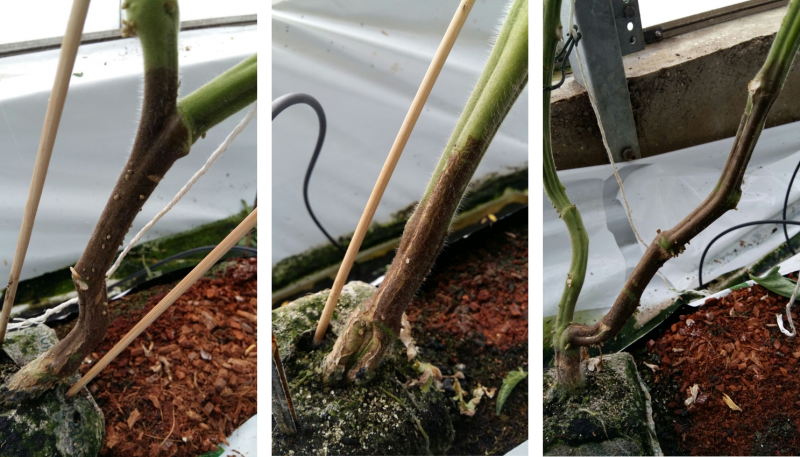 Symptoms of the 2018 outbreak of P. infestans in UK crops were slightly different, having been initiated early in the season on young plants. Some leaf spotting was seen, but stem lesions were prominent in all affected plants, usually starting just above, or near, the graft union.

These early symptoms resulted in significant plant losses, though some plants survived while still exhibiting brown stem lesions. Browning on stems is not deep and doesn’t appear to penetrate to the level of the vascular tissues. The browning spreads right round and then along affected stems and bears a superficial resemblance to Botrytis stem rot, although generally stems of plants that have survived the initial stages of the disease do not wilt and die off like Botrytis-affected stems.

Nevertheless, affected shoots show much reduced vigour, with the green shoots above the affected area being thinner and bearing a reduced yield.

On one nursery assessed during May 2018, all symptomatic plants were exhibiting symptoms at a comparable stage, with no visible evidence of secondary infection, although the browning was still extending at a rate of several centimetres per week. Immunodiagnostic tests were carried out to compare swab samples from plant surfaces and various surfaces within the greenhouse with stem tissue scrapes and leaf samples. These tests showed strong presence of P. infestans in the brown lesions and no presence in any green tissues tested. Two infected plants were tested by the James Hutton Institute, who identified them both as belonging to the EU 39 A1 genotype.

No pathogen material was detected in surface swabs or from green tissue scrapes, indicating that little or no sporulation was present at the time of sampling. The lack of sporulation is probably because conditions in the greenhouse at this time were not favourable for sporulation to occur, e.g. dry and hot. This situation may change later in the season, with the cooler, wetter weather of late summer/early autumn, which makes relative humidity (RH) more difficult to control.

The James Hutton Institute can offer isolate testing for any growers wishing to send samples in (costs to be covered by individual businesses). David Cooke can be contacted by email to discuss costs and additional information that might be required at David.Cooke@hutton.ac.uk

Sporulation is favoured by moderately warm, moist conditions: RH >90% and temperatures 10–20°C, or very light surface wetness (like dew). Under these conditions, sporangiophores grow. This can be identified by grey to whitish mouldy growth on the surface, usually on the underside of infected leaves, and on the brown stem lesions where it often appears at the edges of the brown at first. These sporangiophores bear many lemon-shaped sporangia, which are sometimes referred to as conidia.

Sporangia can break off and be carried by wind for comparatively long distances. If they arrive on host tissues under favourable conditions, there are two ways in which they can germinate:

Zoospores have another trick up their sleeves: if after swimming for a while, they don’t find suitable host tissues, they can still form into cysts without germinating. Cysts in this situation, so long as they stay in water, can remain ‘resting’ for days until they receive a suitable stimulus (e.g. very dilute plant exudates, sugars or amino acids), when they will release a new swimming zoospore able to infect new plant material.

It is important to note, however, that even under environmental conditions which are not favourable for the development of infectious spores, the pathogen will remain viable in the plant for as long as the plant is alive. Only complete destruction of the plant will remove the risk of future activity.

Leaving removed leaves on the floor is a potential route for disease spread under conditions suitable for sporulation. As the season progresses towards times when the risks of prolonged periods of high RH% are greater, it is important to take any infected material out of the greenhouse before pathogen inoculum can build up on it.

Once sporulation does start to occur, care will need to be taken over removal and disposal of such material to minimise dispersing/releasing inoculum that might be present on it. Infected material should be collected in sacks/bags and any trailers or skips containing removed material should be positioned away from the greenhouse. If possible, they should be sheltered from wind and rain as P. infestans inoculum is readily dispersed in fine droplets during wind-blown rain/drizzle.

In-vessel aerobic composting, maintaining temperatures >55–60°C for part of the process, is an effective way of killing off Phytophthora and Pythium inoculum.

Detailed hygiene information can be found in the Biosecurity in protected edibles guide.

The control of Phytophthora infestans is currently covered by the use of azoxystrobin on tomato and aubergine – this has protective and curative activity and is restricted to three applications per crop. However, use in 2018 has proved ineffective in slowing the development of the disease, probably due to the aggressiveness of the strain. The use of gliocladium catenulatum strain J1446 is assumed to have some protective action – but it has no curative activity. Mancozeb is also approved on tomato as a protectant with five applications per crop but with no curative activity. In the past, the limited number of applications would have been sufficient as the disease would not appear until later in the year.

An urgent EAMU was granted in early 2018 for the use of cyazofamid, providing a new protectant mode of action for protected tomato, cucumber and aubergine.

The concern with the current situation is the early appearance – and the lack of a product with useful curative activity. As part of the crop protection project SCEPTREplus, work will be conducted to test alternative products that can help fill the gap in the crop protection toolkit for control of Phytophthora infestans in tomato production.

Conditions to avoid for P. infestans development are a combination of 10–20°C and high RH% and/or surface wetness. A big advantage that greenhouse production has over outdoors is that the canopy environment can be carefully managed using factors such as ‘minimum pipe temperature’ and venting, although there comes a point when outside conditions can render these inefficient. At times when potentially high humidity cannot be avoided, extra vigilance is needed to make sure sporulation is not occurring and to take action if it does occur. It is important to avoid the development of standing water and surface wetness and to remove all infected plant material, as explained in the Biosecurity section above.

AHDB Horticulture project ‘A desk-study to review global knowledge on best practice for Oomycete root-rot detection and control’ gives a summary of best-practice treatment for different water sources in terms of oomycete pathogens, with advantages and disadvantages of the treatments.

Methods of water treatment for the elimination of pathogens