Ornamental grasses suitable for use as ‘fillers’ in mixed bouquets

Trials undertaken at the Cut Flower Centre (CFC) set out to assess the potential of ornamental grasses as a ‘seasonal filler’ to add structure and bulk to cut flower bouquets. Trials assessed the potential of a range of annual grass species and evaluation of perennial species will follow.

Initial trials investigated the potential of direct drilling seed into the soil and the use of plug-raised plants, grown both under Spanish tunnels and outdoors. Plug plants were planted under protection during weeks 16-17, at a density of 25 and 64 plants/m2, and outdoors in week 17 at the same densities. The direct drilling trial was sown in weeks 18 and 28, seedlings were thinned to approximately 64 plants/m2.

All of the grass species grew away vigorously, with the plug plants under protection producing marketable stems within 10 weeks, however, the outdoor plug plants were damaged by frost just after planting. The early seed sown crop was ready after 14 weeks whereas the later sowing only took eight weeks. The trials demonstrated that early direct drilled crops can take up to four weeks longer to mature than equivalent plug planted crops, but the difference appears to lessen with later sown crops, and that the lower plant density trialled was the most suitable for producing the best quality flower stems.

Trials staged the following year focused on Bromus macrostachys, Eragrostis elegans, Panicum elegans ‘Sprinkles’, P. miliaceum violaceum, Setaria italica ‘Max’, S. pumila glauca and Sorghum nigrum. One of the trial objectives was to investigate the potential for cropping continuity using three different planting dates under protection, these were weeks 21, 25 and 30. Direct drilling was also investigated again, but as germination from the week 14 sowing was erratic, it was decided to only use plug plants for the remainder of the trial. The crops were ready for harvesting within eight to 10 weeks of planting, the single direct-drilled crop took an additional four weeks. The trials indicated that continuity of supply could be achieved by the use of sequential planting (or sowing) dates with a weekly or fortnightly interval being ideal.

Precise seeding rates for the different grass species need to be obtained from the relevant seed suppliers. As with all outdoor cut flower crops, the commercial success of direct-drilled ornamental grasses will be determined by the prevailing weather conditions, but indications are that if well irrigated, an outdoor crop will produce shorter (but still commercially acceptable flower stems of 55cm or more) and more robust stems than those generated by plants under protection.

The harvesting stage of the product will depend upon the grass species grown and the agreed customer specification, but in broad terms the flower heads should be harvested as soon as the individual florets become visible and before any shedding of pollen occurs.

The most cost-effective way of harvesting grasses is once over, when the whole crop is harvested at the same time and sorting and grading follows on a flower line in the packhouse. Regular sequential plantings (or sowings) of the crop are essential to ensure the success of once-over harvesting. Yield will vary by grass species, but information from the Netherlands indicates a glasshouse-grown crop of Panicum virgatum can produce up to 10-15 flower stems/plant.

The most cost-effective way of harvesting grasses is once over, when the whole crop is harvested at the same time

During 2016, samples were harvested and placed into buckets of water containing either Chrysal RVB Clear Intensive (1ml/L) or Chrysal CVBN (1 tablet/2L) as a water treatment, before being transferred to a vase life facility for two days at 2°C in order to simulate the transit phase in the supply chain. After two days, the stems were recut, placed in a solution of Chrysal Professional 2 T-Bag and put into a vase life room for three days to simulate retailer conditions. The home vase life phase then commenced afterwards for a further seven days.

Bromus macrostachys, Eragrostis elegans, Panicum elegans ‘Sprinkles’, P. miliaceum violaceum, Setaria italica ‘Max’, Sorghum nigrum and Stipa capillata ‘Lace Veil’ were all subjected to the standard vase life testing. All samples were still in an acceptable condition by day seven of the home vase life testing phase. By this stage some leaves of Bromus macrostachys, Panicum miliaceum violaceum and Setaria italica ‘Max’ were yellowing or showing symptoms of dehydration, but not to the extent that would have resulted in failure of a mixed bouquet. Little or no shedding of anthers or pollen was seen. The results indicate that all of these grass species have potential for use in mixed bouquets with up to a seven day guarantee.

During the two years that ornamental grasses were trialled at the CFC they generated a significant amount of industry interest. A wide range of both annual and perennial ornamental grass species are already grown for direct sales and while there has been some larger scale commercial production for the multiple retailers, this is still an under exploited crop. Some grass species are used in mixed bunches as ‘seasonal fillers,’ especially those from the genus Panicum, but much of this originates from the Netherlands and there appears to be no reason why UK growers cannot supply this market. Growers who are interested in this crop should discuss the market requirements with their customers in order to determine an appropriate production protocol. 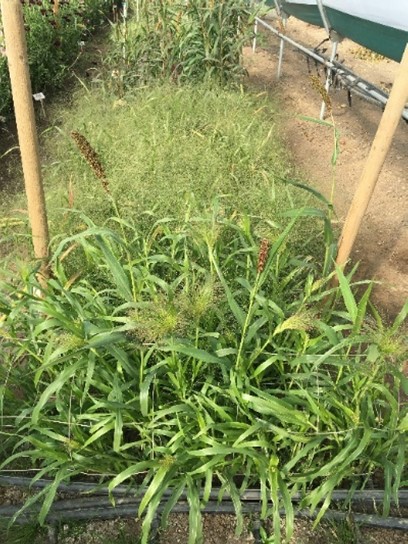 Scabious as a cut flower for the UK market

Scabious are well established as a garden plant, but apart from the outdoor production of traditional perennial varieties they have not been grown as a commercial cut flower in the UK. Trials undertaken at the Cut Flower Centre (CFC) from 2015 through to 2019 have assessed the potential of two new series of cutting-raised Scabious which have been specifically bred for cut flower production.

Botrytis is one of the most economically significant pathogens affecting peony, and can result in crop losses in excess of 20% during wet years. Management of the disease is reliant on cultural control, site hygiene measures and fungicide inputs.

Seed-raised species suitable for use as ‘fillers’ in mixed bouquets

Trials undertaken at the Cut Flower Centre (CFC) between 2014 and 2017 set out to assess the potential of a range of seed-raised species as ‘seasonal fillers’ to add structure and bulk to cut flower bouquets.